Jean-Luc has played the piano accordion for pleasure since the age of nine. After a time playing traditional Québecois music, over some twenty years he explored the music of Eastern Europe, Scandinavia, Country/Folk and the traditional and accordion music of  France. It was only after meeting with other accordion players from the United States and Western Canada at the 2004 Carrefour mondial de l’accordéon de Montmagny that he decided to specialize in the music of Eastern Europe, taking master classes in Montreal and at other workshops run by KlezKanada. Jean-Luc joined the Klezmer group, The Schmaltz Orchestra, in 2011, helped found the group Anches et cordes in 2013, and, in 2015, became a member of the KlezmOuche Band, now merged with The Schmaltz Orchestra in 2017. 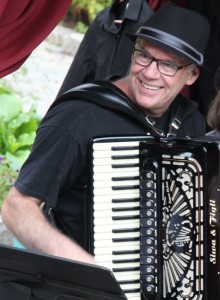